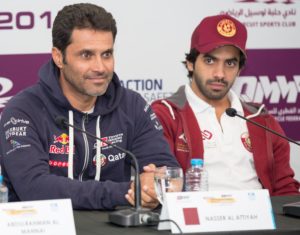 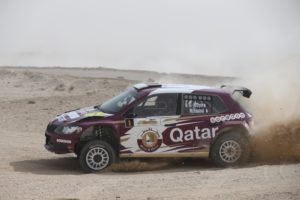 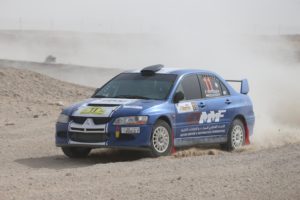 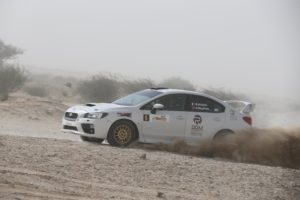 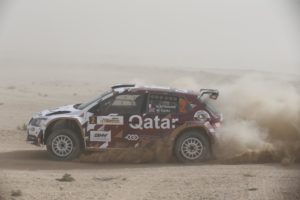 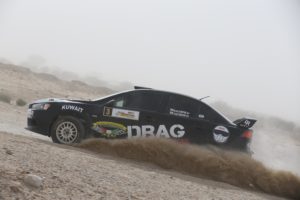 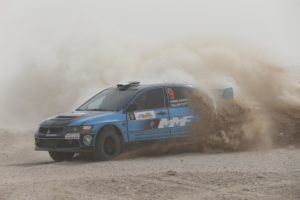 FROM AL-SUWAIDI TO LEAD IN QATAR RALLY

MERC 2 advantage for Al-Naimi; Al-Kuwari in control in National Rally

LOSAIL (Qatar): It wasn’t just foul weather conditions and poor visibility that Nasser Saleh Al-Attiyah had to contend with to hold an outright lead of 10.4 seconds after the opening leg of the QMMF Qatar International Rally on Friday.

Bidding to win the opening round of the FIA Middle East Rally Championship for a 14th time, the Autotek-run Skoda Fabia R5 driver and French navigator Matthieu Baumel ceded the opening special stage to young Khaled Al-Suwaidi and British co-driver Marshall Clarke, before regaining the advantage on stage four and reaching the overnight halt at the top of the leader board.

“The dust from the wind made visibility really difficult this morning,” admitted Al-Attiyah, whose Autotek mechanics were forced to carry out transmission repairs at final service after a front differential failure. “We had five short stages without any real issues, other than a lot of dust. There was no service at halfway, so that is always at the back of your mind as well. We have the lead and that was the goal. We have bad weather here, but it is rare to be like this and I was grateful to the QMMF for cancelling the second stage and thinking of us.”

Al-Suwaidi said: “The weather conditions were very bad and that was the main reason we got tired. I had the lead early on, but I was not able to put more pressure on Nasser because of the weather and I was afraid to push too hard over the second loop in case I made a mistake.”

The two Skoda Fabia R5 drivers were the class of a depleted field. Qatar’s Rashed Al-Naimi and new Portuguese co-driver Hugo Magalães settled into a routine well on the navigator’s first rally in Qatar and held a comfortable third overall and an MERC 2 (Group N) lead over the Kuwaiti pairing of Meshari and Fares Al-Thefiri. The Kuwaiti duo were five minutes adrift.

After six of the 10 provisional starters were refused entry into the Qatar International Rally by event stewards for contravening various safety regulations, only four cars started the main event and a further three continued in a National Rally running shortly behind. A biting northerly wind and shifting dust didn’t help matters either and the second stage was cancelled on safety grounds.

Former co-driver Nasser Al-Kuwari had been looking forward to pushing for the podium in the main event as a driver, but the Qatari and his Irish navigator Killian Duffy took small consolation from a comfortable overnight lead in the Qatar National Rally.

They won each of the five special stages to reach Losail with a massive lead of 13min 06sec over Khaled Al-Mohannadi and his new Indian co-driver Musa Sherif. Al-Kuwari would have been classified fourth in the international and just 10 seconds behind Al-Naimi had his car passed all the FIA checks on Thursday.

Lebanon’s Henry Kahy teamed up with Jordanian Musa Djiyerian at the 11th hour and held a distant third in a third Mitsubishi Lancer Evolution.

Six short special stages were planned for a bitterly cold Friday. The forecast was for strong northerly winds of over 30mph and temperatures were down as low as 7°C with the wind chill at Losail before the start.

Only four cars made the official start list for the MERC rally. Masoud Al-Saleh was given the option to re-scrutineer before the start after failing to conform to safety regulations involving the general circuit breaker and the manual fire extinguisher/anti-torpedo device. He was not able to continue and withdrew from the rally.

At the customary meeting on Thursday evening, five of the original 10 cars on the provisional list were refused a start in the international rally in an unprecedented move by the stewards, following a scrutineering report submitted by French FIA Technical Delegate, Lionel Carre, concerning various safety regulations.

The quintet were given the option to take part in a new National Rally section behind the main event. Lebanese navigator Rony Maroun returned to the UAE, so Henry Kahy elected to start with Jordanian navigator Musa Djiyerian. Asem Aref decided not to run the risk of damaging his Renault with no chance of picking up MERC 3 points. Qatar’s Saif Al-Naimi was also a non-starter. It was a below-the belt punch to the FIA Middle East Rally Championship, but the FIA regulations were plain to see.

Cars were flagged away from the start by the QMMF’s President Abdulrahman Al-Mannai and Executive Director Sultan Al-Muraikhi and Al-Attiyah led three rivals into the MERC section of the event. Three cars followed in the National Rally.

Somewhat surprisingly, perhaps, Al-Suwaidi – running on soft tyres to his rival’s harder compounds – managed to beat Al-Attiyah by 8.7 seconds in the poor visibility and shifting sand that affected the opening 9.84km of the Mekaines stage to take the outright lead. Al-Naimi comfortably beat Al-Thefiri to lead Group N by 47 seconds, although Al-Kuwari – running in the National Rally – was considerably faster.

The second stage was cancelled on safety grounds because of poor visibility, but Al-Attiyah was not to be denied through Umm Wishah and the Qatari beat Al-Suwaidi by six seconds to trail the youngster by two heading to the remote refuelling zone. Al-Kuwari held a 3min 51.40sec lead in the National event from Al-Mohannadi. Henry Kahy was a distant third.

Al-Attiyah snatched a 1.2-second advantage through the fourth stage and extended his advantage over Al-Suwaidi to 7.5 seconds through the second Salwa special. Al-Naimi was untroubled in MERC 2 and Al-Kuwari’s National Rally lead rose to 11min 06sec.

Al-Attiyah won the last stage of the day by 2.90 seconds to take a lead of 10.40 seconds back to Losail. Al-Naimi was a distant third and comfortably clear of Al-Thefiri in MERC 2.

Saturday’s route consists of a further six special stages to the west of Doha, split by a remote servicing opportunity at Al-Kharsaah. A team of four personnel and the crew only will be permitted to work on the cars for 15 minutes and only parts carried in the rally car may be used in repairs, although tyre changes and refuelling will be permitted.

As a two-day cold front passes there is a marked improvement in the weather forecast for Saturday with sunny intervals expected and temperatures rising to around 18°C.

For live results on Saturday: