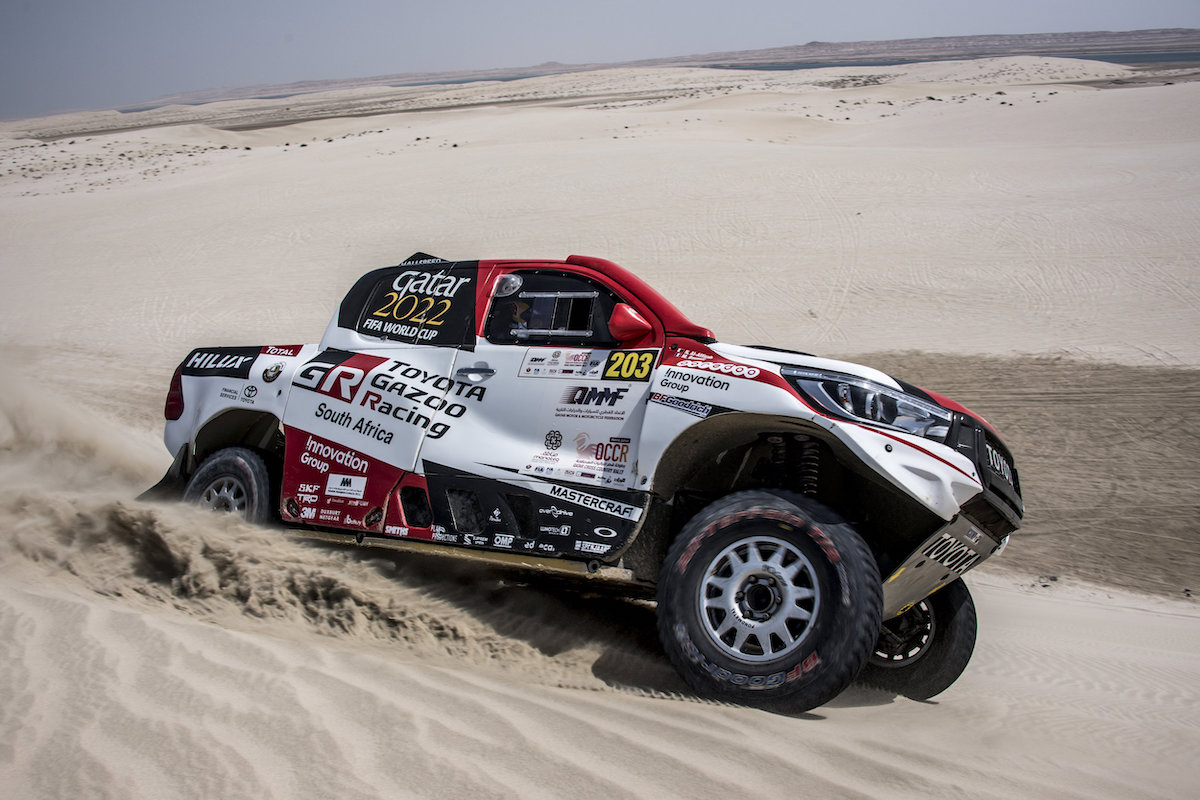 LUSAIL (Qatar): Nasser Saleh Al-Attiyah continued his relentless push towards a sixth victory in the Manateq Qatar Cross-Country Rally with another fastest time on one of Monday’s two selective sections in the deserts of Qatar. That enabled the Toyota driver and his French co-driver Matthieu Baumel to take an overall lead of 12min 33sec into the final stage on Tuesday.

Yazeed Al-Rajhi and Dirk von Zitzewitz began the day 9min 52sec behind their team-mates, but lost further ground through the opening stage with a series of three flat tyres, although the Saudi/German pairing did strengthen their hold on second place to 3min 14sec over Jakub Przygonski and his German navigator Timo Gottschalk, the Pole driving the first of two X-raid MINI John Cooper Works Rally cars.

Al-Attiyah’s fastest time on the first of the day’s two stages enabled the Qatari to extend his advantage over Al-Rajhi to 14min 35sec, but that advantage was pegged back by Al-Rajhi in the shorter second test when the Saudi carded his first stage win of the campaign.

Al-Attiyah said: “I am quite happy today. We had one flat tyre from the beginning of stage one. After that, we tried to push and we made the time. The second one, I knew we just had to finish and not take any risks. It was not an easy day. There was a lot of wind and dust and, to open, the navigation is not easy. But we are quite happy. Now we need to finish.”

“Three punctures but everything is okay,” said Al-Rajhi, despite losing the rear-left wing panel of his Hilux after damage sustained by one of the flat tyres. “We kept going. We also took care and didn’t attack on the second one. We will take the last day easy.”

Przygonski said: “In 80km, we got three punctures and I lost a lot of confidence. Without three tyres it is hard to drive. We were trying to survive after that. One stone and we would have stopped our race. Without four wheels we could not continue. Tomorrow, we need to push and figure a good strategy.”

The BMW X3CC crew of Vladimir Vasilyev and Konstantin Zhiltsov remain in a distant fourth overall, but still in a position to score a useful haul of championship points.

Yasir Seaidan and French navigator Laurent Lichtleuchter were fourth quickest on SS4 and third in the next one to retain fifth in the second MINI. “The first stage we lost a few minutes but we did not get any punctures and we did a good job on the second one. We crossed the dunes very well. I am glad we understand more about the car. Only two cars in front of us tomorrow, so it will not be easy but we hope to do better.”

Czech driver Miroslav Zapletal began the day in sixth in his self-designed Ford F-150 Evo, but the experienced Baja campaigner stopped after the second passage control with two flat tyres and damaged rear-right transmission. He incurred further penalties for failing to start SS5 and slipped out of overall contention.

Bernhard Ten Brinke and Tom Colsoul were second quickest in the first stage of the morning and completed the second special in fourth. They moved up to sixth at the expense of the troubled Zapletal. “It was a little bit better than yesterday. The first stage was a good one with only one puncture and we drive a nice clear race. Navigation was good. The second part was also quite good. We must turn around two times for one dune, because we were on the wrong side and it cost us some seconds. Now we want to finish with a nice result.”

Italy’s Eugenio Amos bounced back from feeling unwell on Sunday to top the times at the first passage control in his Ford 2WD Buggy. He and French co-driver Sebastien Delaunay went on to finish the special in third place and were eighth on the second one after losing their way in the dunes for a time.

Monster Energy Can-Am driver Reinaldo Varela retains a massive lead of 2hrs 36min 10sec in the T3 category over Russian Fedor Vorobeyev. Italian female driver Camelia Liparoti persevered at the rear of the field and was rewarded with ninth position and third in T3 at the end of the day. Qatari Khalid Al-Mohannadi went over his permitted time limit for the stage and incurred time penalties.

Varela said: “Today was difficult navigation, but Qatar is like this. There were very nice dunes in the second stage and we did well. We have a very good advantage to the second place, so we are taking care not to get lost, taking care of the car, everything.”

After their third stage problems, Oman’s Abdullah Al-Zubair and Qatar’s Adel Abdulla were back in a strong pace on day four and the latter set the fastest time on both day’s stages, but it was scant consolation for the disappointment of the last two days.

Ahmed Al-Kuwari stopped with mechanical issues shortly after the start and slipped to ninth on the opening test and Rashid Al-Mohannadi lost time near the end of the second special.

In the duel for T2 honours, Mohammed Al-Meer ground to a halt close to PC1 and Mohammed Al-Harqan lost his way for a few minutes before the control and was then sidelined with mechanical issues and further time penalties. Al-Meer remains on course for the T2 win, despite going dangerous close to OTL in the final kilometres of the day.

Ibrahim Al-Muhanna was still running at the rear of the field in his T4 Mercedes Unimog.

Two selective sections were arranged on leg four, split by a road liaison section of 56.39km where service was not permitted.

The first section of 227.99km included three passage controls at 80.63km, 133.83km and 186.06km, started to the north of Doha and wound it way through the central-western deserts to finish close to the west coast. The shorter second stage of 121.41km finished 95.75km from the bivouac and had no PCs, but passed a series of treacherous sand dunes along the eastern coast, north of the Inland Sea and finishes to the west of Mesaieed.

Twenty-one of the 22 FIA cars were permitted to start leg four: Mubarak Al-Khelaifi’s Polaris was sidelined with engine failure, but Mohammed Al-Harqan returned to the action with 100 hours of time penalties after his gear selection issues on Sunday. There were also maximum stage penalties for Abdullah Al-Zubair, Eugenio Amos and Mohammed Al-Attiyah.

The final selective section of the event gets underway at 08.05hrs on Tuesday and runs for just 263.8km. Finishers then return to the bivouac at the Lusail Sports Arena to prepare for the ceremonial finish at The Pearl-Qatar at 18.00hrs. 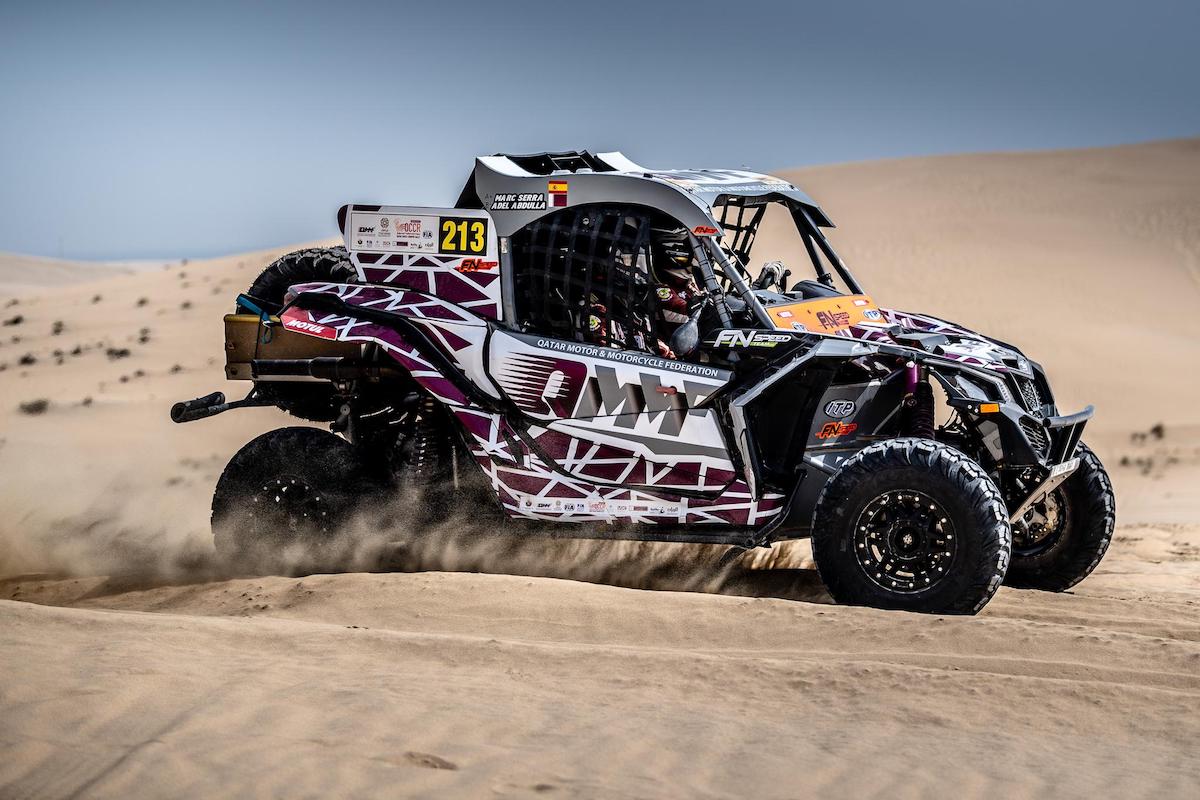 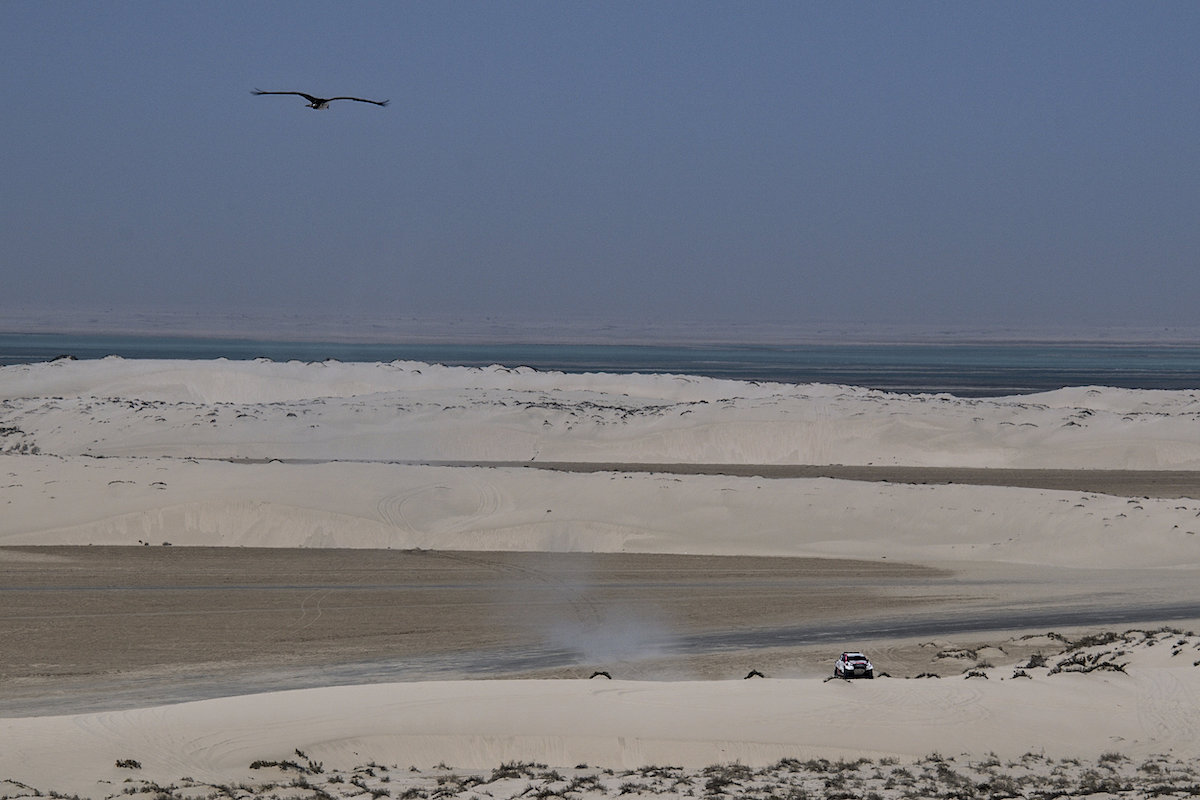 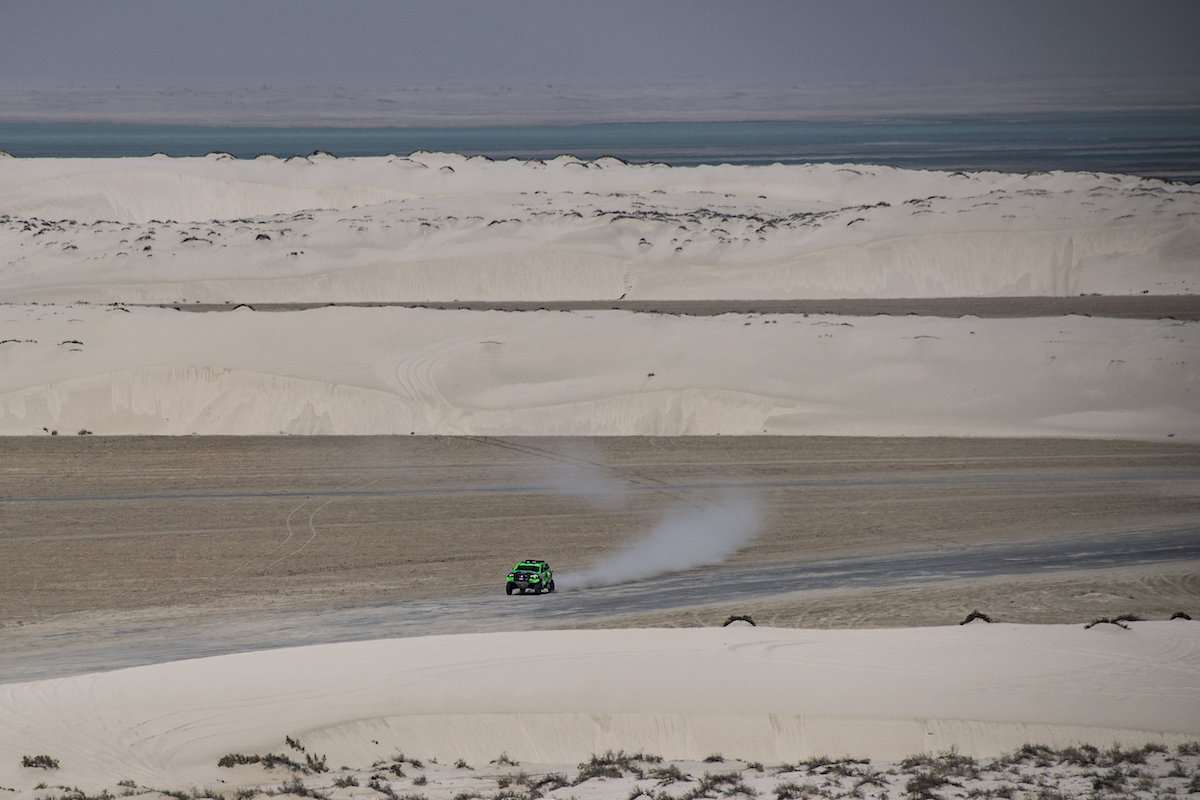 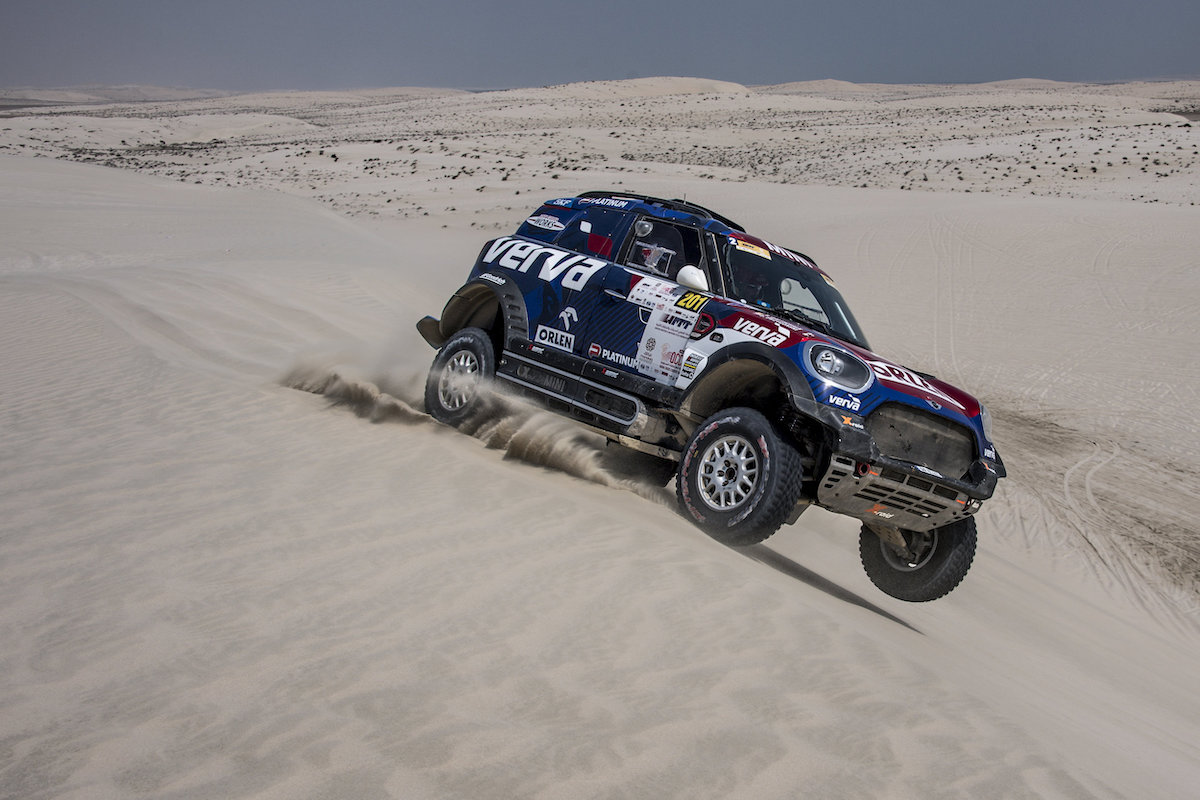